Interesting how time intersects.  So in last week’s blog, I released an updated Happy Holidays in song playist, which included a few extra Chanukah songs.  Some people provided links to some songs you’ll find next year (though I did informally add them pending placement within the flow of the existing list.).  In the week that followed last year’s blog releasing that year’s updated playlist, we attended a family Chanukah gathering hosted by my brother; I blogged about the music listened to on the way there and back.  So while a reprise of that gathering awaits later this month, last night we visited our niece and grandniece.

For this ride I chose to start with the Chanukah songs on the holiday playlist premiered last Sunday (of course you may find a version in my iTunes).

The return trip featured a playlist developed (well sort of) in 2012 for a feature that a previous set of bloggers followed for a few years – Gotham Story Week. 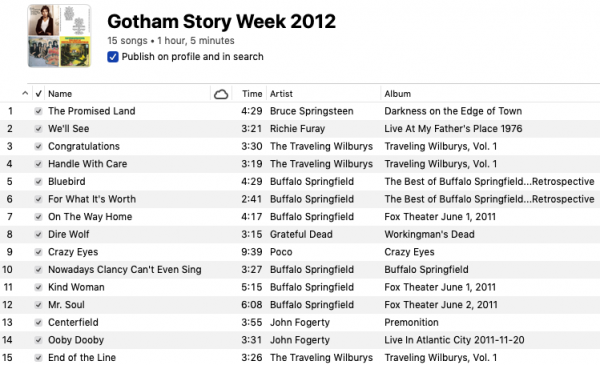 I created an alternative story using the comments that year.

And for a few years that followed working with some others, including my friend Josh Zinder, we sort of hijacked the story via the comments (See here.). I know the recruits enjoyed the exercise.

I enjoyed listening to this song playlist even more.  It lasted the entire ride home.

It features 15 songs, the first song, The Promised Land (Bruce Springsteen); the last song, End of the Line (The Traveling Wilburys who provided two other songs, #3 and #4 on the list).

John Fogerty sings two selections, one from his Creedence Clearwater Revival days (#13) and the other his solo baseball classic (#14).

The Grateful Dead round the song list with the middle tune (#8).

Light It Up Growin' Up
Comments
Order by:
Per page:
Home
›
Blog
›
Joyful Rides
Home About Us Gotham Leaders Hall Of Fame Terms Of Use Privacy Policy Power Of Gotham COVID Resources
Copyright © 2021 Gotham City Networking, Inc.
Please, enter a value here
Are you sure?