It was not planned but friends we enjoyed last night’s concert – really more a show – with suggested a blog on little known rock trivia. The really obscure one involved a guitar player and one-half of a songwriting team in one of the long-lasting bands of all time who sang in a children’s choir at the coronation of Queen Elizabeth. The story teller was one-half of a hit duo who went on to manage and produce a number of artists including James Taylor and Linda Ronstadt. The show featured the storyteller and the other half of the sixties duo often confused with his and vice-versa (and who also attended the Queens’s coronation as a page to his uncle who was the fifth Duke of Wellington). 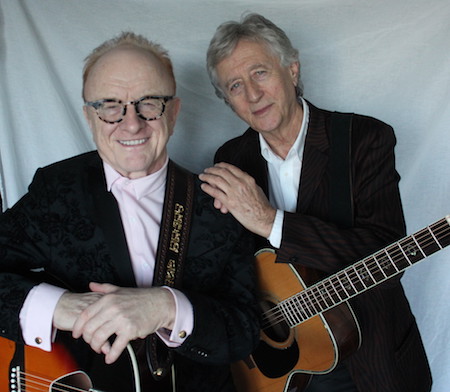 Peter, one half of Peter and Gordon (Waller), Jeremy, one-half of Chad (Stuart) and Jeremy, both enjoyed recording success in the mid-sixties as part of two British Invasion dueos. Remember Lady Godiva, I Go To Pieces and World Without Love? All hits by Peter and Gordon. How about Distant Shores, Yesterday’s Gone and A Sumer Song? All hits by Chad and Jeremy.

Some years ago Shelly and I trekked to the Capitol Theatre in Portchester to see the (Young) Rascals One Upon A Dream show conceived by Little Steven Van Zandt. Between songs, we enjoyed the stories of the group members forays into music, the band’s founding and recording successes.

followed that theme but the stories allowed both artists to also play songs that explained their early influences such Buddy Holly who like Asher wore glasses and looked not like a rock star. They opened with It Doesn’t Matter Anymore. Later they covered Elvis (All Shook Up).

Another cool bit of trivia preceded their cover of As Tears Go By. Keith Richard and Mick Jagger wrote the song for Marianne Faithful who was married at the time Peter Asher was best man at her wedding.). Who introduced her to the Stones’ Manager? Peter Asher of course. Who dated her earlier? Jeremy Clyde.

Even got to introduce the venue’s owner/ promoter to a friend (See pic upper left near title.).

All Shook Up (Elvis cover)

No Other Baby (The Vipers cover)

Willow Weep for Me (Ted Fiorito & His Orchestra cover)

I Don't Want to See You Again (Peter & Gordon cover)

As Tears Go By (The Rolling Stones cover)

Nobody I Know (Peter & Gordon cover)

She Shed Says It All Seven
Guest Comments
Comments from Guests
Home
›
Blog
›
Know your rock?
Home About Us Gotham Leaders Hall Of Fame Terms Of Use Privacy Policy Power Of Gotham COVID Resources
Copyright © 2022 Gotham City Networking, Inc.
Please, enter a value here
Are you sure?