A Friendly Gathering Around A Rivalry

We took over Citi Field last Tuesday.  At least one section of the Left-Field Landing.  Last week’s commentary concluded with a mention of Tuesday night when some 250 of my closest friends and their family, friends and colleagues would join me at Citi Field where Friday’s bloggers Yankees and my Mets previewed a later October (and maybe early November) “series.” My “party” included my nephew Doug and daughter Marisa.

The Mets recognized our Gotham Networking 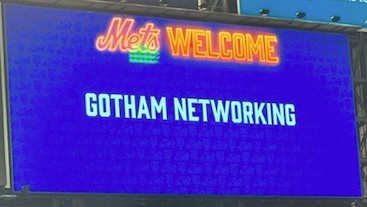 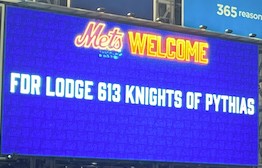 Fred and I took an early pic with my Mets rep, Aaron Riley who arranged our seating and my parties for Opening Day and Keith's number retirement (He is excellent so if you need/ want an intro, just reach out!).

Best of all we raised some nice cash for the Gotham and Kings-FDR Tolerance Foundations.

Fred may argue the point but no doubt exists the better (of the two) team(s on the field) won that and the next eve. Marisa and I monitored the Wednesday game while attending what Marisa called a really great performance by Jackson Browne

(view setlist below) at the Beacon Theatre; Marisa was seeing Jackson for the first time; I saw him first nearly 50 years ago at Wollman Rink at the great ever summer concert series the former president killed off.

Friday involved some in-person campaign stops, including outside an iconic restaurant (not disclosing as no need to alert the opponents...) but campaign staffer Allie took the pic upper right describing me “The most Queens person ever.” I’ll take that.

The Barricades of Heaven

The Long Way Around

Rock Me on the Water

A Human Touch (with Leslie Mendelson)

That Girl Could Sing

I Am a Patriot (Little Steven cover)

You Love the Thunder

Until Justice Is Real

Late for the Sky

Our Lady of the Well